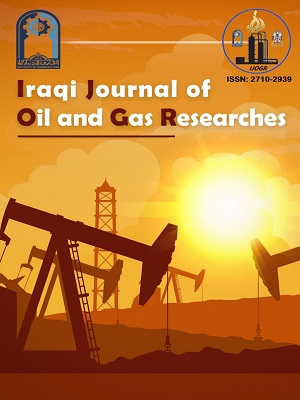 Asphaltene precipitation is one of the main hitches in the oil sector through the production and refining stages that causes real damages every year. The object of the present work is to study the effect of the deasphalting process of crude oils using different concentrations (5, 10, and 15 wt.%) of n-heptane as a solvent, the experiments were done at a laboratory scale. The deasphalting process quality was based on the sulfur content, conradson carbon residue, density, API, and kinematic viscosity. The results have been shown that the deasphalting process quality was enhanced with increasing weight fraction of added n-heptane, the API value and kinematic viscosity were increased by about 37 and 19.5% respectively, while the density, conradson carbon residue, and sulfur content were decreased by about 5, 17 and 26.8% respectively when 15 wt.% of n-heptane was used, i.e. , the quality of deasphalting methods was enhanced with increased solvent concentrations.

Field G is a highly fractured and faulty field, this paper is seeking about the necessity to keep running Image logs in new oil wells and how the interpretation of the results would led the team to completing wells optimally and to design our well completion properly to prevent high initial water cut. Learnings are summarized from 40+ image logs ran in this field over the last few years. A cross field G seismic interpretation confirmed on lapping reservoirs and 3 major fault trends with different transmissibility. Also, sseismic and sub seismic Faults and fractures are confirmed from BHI with a NE-SW strike of field G and can be possibly related to production behavior of some wells.

In 2015, field G Water Encroachment Study was conducted to identify the cause of high initial water cut of producers. It proposed that detecting fractures early via under-balanced drilling, Borehole Imaging Tools (BHI) and sealing the conduits with production packers would help reduce initial water-cuts [2].
BHI tools are open hole tools that measure either electrical conductivity of the borehole wall or the sonic travel time and amplitude. Micro-conductivity or amplitude and travel time measurements generate an image that shows bedding, fractures and many other fine-scale features. Acoustic tools are preferred in Oil Based Mud (OBM) system and hence they have not been used in field G to the extent that it required a dedicated discussion.

Carbon dioxide (CO2) flooding deliberated as one of the most common and feasible used gas to improve oil recovery. CO2 utilisation has grown significantly due to availability, greenhouse effect and easy achievement of miscibility relative to other gases. There have been limited experimental efforts conducted at core-scale focused on evaluating the influence of permeability heterogeneity on oil recovery. Thus the results from this manuscript are essential to highlight the importance of geological uncertainties in the current and future enhanced oil recovery projects.
This manuscript presents a coupled experimental and simulation study to assess the effect of cross bedded reservoir heterogeneity on WAG flooding performance. We performed core flooding experiments with a fluid system consisting of n C10, synthetic brine, and CO2 at a temperature of 343 K and 17.2 MPa pore pressure. In addition to the experimental work, a 2D core scale CMG-GEM simulation associated with PVT module CMG WinProp has been built based on our experimental results. We found that oil recovery decreases dramatically with increasing permeability ratio of cross bedded core samples. Besides, our results revealed channelling of injected CO2 in high permeability beds leaving a considerable amount of oil untouched in low permeability bed. Furthermore, we pronounced a water shielding effect which reduces further contact of the injected CO2 with oil. We thus conclude that reservoir heterogeneity significantly impact WAG flooding performance and evaluation of these influences on oil recovery before any field application are essential.

Abstract
This study are developed to predict the permeability of Tertiary reservoir in Khabaz oil field northern of Iraq. The Tertiary reservoir include many geological formations (Aaliji, Jaddala, Oligocene system, Jeribe, Fatha, Muqdadia formations). Actually Seven wells (Kz-1, Kz-2, Kz-3, Kz-4, Kz-9, Kz-14, Kz-15) used for this study in Khabaz oil field. Two methods are used, which are classical methods depending on core test and well log interpretations and FZI methods, the results show that the permeability estimated by core and well log interpretation method which depending on just the porosity are not close enough for the real values because it’s not toke in the consideration all the parameters that effect the values of permeability.
The FZI method are show more real values and provides best correlation coefficient in comparing with the classical methods. The must conclusions of the result refer that the FZI method results are more accurate because of the high correlation coefficient (R2) values.

A trends in Ozone Treatment of Wastewater: a Review

In recent years, great efforts have been done by the scientific community to develop many green chemical processes to treat water and wastewater effluent. Taking into consideration these new approaches, a new environmentally friendly techniques are giving special attention such as ozonization. Molecular ozone, or tri-oxygen, can be considered as an inorganic molecule with the chemical formula of O3. Ozone is a pale blue gas having pungent smell and far less stable molecule than the molecular O2, decaying in the lower atmosphere to free O2 gas. Ozone is an efficient gas for killing bacteria and eliminating endotoxins and biofilm, with effectiveness being dependent on concentration and operating time. In addition, because the ozone is a strong oxidant, suitably compatible materials ought to be adopted. Moreover, the manufacture of ozone should always be supervised and its level checked occasionally in the surrounding environment to keep a pollution air standard of less than 0.1 ppm. In this paper, essentials and practical features dealing with ozonization system and its utilization are presented and discussed.

Well cementing is an important process during oil and gas well drilling due role in supporting the well casing and preventing formation collapsing. Generally, there are two types of cementing process that are primary cementing and remedial cementing. The type of cement uses in oil and gas well is Portland cement mixed with improvements additives to enhance its characteristics. Various types of cements are used depends on different factors of the cemented region. This cementing process is evaluated using various methods such as ( CBL , Image, VDL, RBT , UST , RIB , URS logs ). Each one of them have its features, specifications and applications. In this paper, we evaluated the cement process for an Iraqi oil well by using CBL, Image and VDL logsy divided to two by selecting two different sections of the well; section A (depth 1780 m to 1800 m) , and section B (depth 1800 m to 1825 m). Our results show that in section A the cementing process is failed because there is no cement behind the casing (a free pipe case is available with fast formation), while section B show a good cementing process.

Crude oil can be extracted from the reservoirs by three mechanisms with different amounts of oil depending on the natural conditions of the reservoir. When the reservoir has an enough pressure, the amount of the produced oil is about 20% to 30% through primary recovery mechanism, and this amount can extent up to about 40% using secondary recovery. Because of the massive amount of the oil left behind the two mechanisms, enhanced oil recovery technique (EOR), the third mechanism, is designed to reduce the residual oil, in which, up to 70% of original oil in place can be recovered (Ahmed, 2018). Almost 3.0 trillion cubic meter light oil and 8.0 trillion cubic meter of unconventional oil will be left underground after primary and secondary stages (Thomas, 2008). Therefore, EOR techniques are applied to improve the oil production and extract much of the oil left in the reservoirs. Economics and technology have to be taken into account to choose the appropriate method in the recovery processes. Mainly, this study discusses various EOR techniques used in the enhancement of the oil recovery, including miscible, immiscible, polymer, surfactants, surfactants-polymer flooding as well as thermal methods.

CO2 injection has proven to be one of the most successful EOR (Enhanced Oil Recovery) methods, as compared with other injection gases CO2 miscibility with oil is easier to achieve. During gas injection into reservoirs, oil might be bypassed on either a micro- or macroscopic scale because of different types of heterogeneities. In this work, the performance of first-contact-miscible (FCM) and immiscible (IM) CO2 injections were investigated experimentally using outcrop sandstone core samples. Decane was also used as the hydrocarbon phase as it has a relatively low minimum miscibility pressure (MMP) with CO2 (12.4 MPa). Core flooding experiments were conducted at two pressures of 17.2 MPa and 9.6 MPa and the common temperature of 343 K. Furthermore, analytical calculations of dimensionless numbers are used to study the dominant forces and mechanisms which are correlated with the results of the core flooding experiments. The impacts of gravity, swelling and vaporization on the end results were inferred from the oil recoveries, variations in the pore pressure and dimensional analysis. For CO2 injection in homogeneous core samples, a maximum recovery of 93.5% and 76% was achieved for the FCM and IM displacements, respectively. The higher recovery results of FCM is attributed to the vanishing capillary pressure between displacing and displaced phases. Dimensional analysis showed that the flow is at the capillary-gravity equilibrium at immiscible conditions, while there is dominance of gravity-viscous forces at miscible conditions.